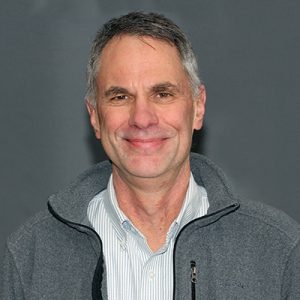 The properties of materials depend to a considerable extent upon the dynamics of the atoms and molecules that comprise them. Our research attempts to develop a molecular-level understanding of dynamics in polymeric materials and low molecular weight glass formers. What is it about the structure of the material and the potentials which govern the interaction of the atoms which makes dynamics fast or slow in a given system? How does the presence of a nearby interface alter the dynamics? As devices move closer to the nanometer length scale, the knowledge obtained from our molecular level experiments will become more and more essential to the correct functioning of these devices. Supercooled liquids/diffusion in thin films. As the glass transition is approached, dynamics become increasingly spatially heterogeneous, i.e., the dynamics in one region of the sample may be orders of magnitude faster than the dynamics a few nanometers way. Our current work involves vapor deposition of thin films of deuterated and hydrogenous glass formers onto a cold substrate, followed by subsequent thermal cycling leading to interdiffusion. These neutron reflectivity and SIMS experiments have extended the range of measured diffusion coefficients by 6 orders of magnitude and shown that diffusion near the glass transition is qualitatively different than in “normal” liquids. Our current work, in combination with theory by other groups, aims to quantitatively predict transport at low temperatures. Creation of exceptionally stable glasses. Using vapor deposition, we have prepared what are very likely the most stable glasses ever made in a laboratory. In an afternoon, we can make glasses that would require at least 4000 years to prepare using any published methodology. Our glasses have useful material properties. For example, because they are more dense and energetically more stable than ordinary glasses, they resist crystallization and water uptake. These stable glasses may have immediate technological relevance, e.g., in organic electronics. More fundamentally, as compared to ordinary glasses, our glasses are much deeper in the energy landscape that controls the thermodynamics and kinetics of an amorphous system. Our stable glasses are ideal for exploring fundamental issues such as the Kauzmann entropy paradox. Ongoing work focuses on characterization of stable glasses by nanocalorimetry, xray reflectivity, ellipsometry and other thin film techniques. Dynamics during the deformation of polymer glasses and nanocomposites. Consider polycarbonate (the polymer used in safety glasses) as a representative polymer glass. When polycarbonate is stretched slightly (less than 1%) at room temperature, it responds like a very stiff, ideal spring. When the force is released, the material returns to its original state. At larger deformation, polycarbonate “yields” and can be pulled without further increase of the applied force. We wish to understand the microscopic mechanism that allows polymer glasses to “flow” (deform) under conditions where mobility is otherwise absent. We have built an apparatus to measure the deformation-induced mobility of polymer glasses and nanocomposites. We have observed large increases in mobility (more than a factor of 100) during deformation over a range of temperatures (from Tg-10 K to Tg -30 K), with larger changes at lower temperatures. These results qualitatively explain the yield behavior of polymer glasses; deformation causes a glass to transform into a viscous liquid that can flow and dissipate large amounts of energy without breaking.