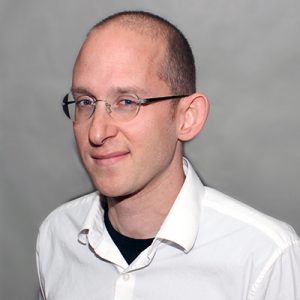 Research
Performing measurements on individual molecules, single-molecule spectroscopy, opens a profoundly informative window into the behavior and properties of chemical systems by revealing heterogeneity in molecular properties and critical unsynchronized dynamics that are obscured in ensemble measurements. We aim to develop new single-molecule techniques and apply them to outstanding and socially relevant problems in chemistry, materials science, and biophysics. Research targets will include novel mechanistic studies of homogeneous catalysts, investigation of electronic properties of conjugated polymers relevant for organic photovoltaic devices, and analysis of protein conformational dynamics. Our efforts will employ creative combinations of fluorescence microscopy, nanophotonics, and chemical synthesis to find the best means of studying our chemical systems of interest.

Watching individual homogeneous catalysts in action
Homogeneous catalysis relies on an intricate series of bond breaking, electron transfer, and bond forming reactions. Production of more active, selective, and easily recyclable (ie., “greener”) catalysts is necessary for the availability of next generation drugs, fuels, and materials. Mechanistic study informs the design of better catalysts, and single-molecule spectroscopy is a powerful tool for mechanistic study because it allows unsynchronized or rare processes to be directly observed. We will look for dynamic and static heterogeneity in the catalyst population, behavior that has been previously seen in enzymes. Organometallic catalysts cycle through states of variable activity and selectivity, likely due to a changing coordination environment. These changes are unsynchronized across the catalyst population and many cannot be observed in ensemble-averaged experiments. We will search for this heterogeneity, quantify transition kinetics, and vary ligand and substrate properties to establish structure-behavior relationships. The goal is to build a detailed understanding of the microscopic events in homogeneous catalysis through revolutionary new observations of individual catalysts in operation. We will observe reaction intermediates that have so far been only speculated upon or indirectly inferred and quantify the lifetimes of those intermediates in active catalysts, not analogs.

Mapping the energy landscape in organic photovoltaics
Optical characterization of single molecules is nearly universally attained via fluorescence. However, fluorescence has many disadvantages, including the reliance upon covalently bound dye molecules with limited photostability, experimental artifacts associated with dyes, and the loss of information about the fascinating molecular photophysics that precede fluorescence. These deficiencies are particularly hindering in the study of organic materials for molecular electronics and organic photovoltaics, where a molecule or molecular assembly optimized for functional charge transfer will generally not be fluorescent. We will fabricate and develop nanophotonic tools to characterize the energy landscape of organic electronic materials, ultimately pushing toward single-molecule resolution. These tools will be employed to characterize structural and electronic heterogeneity in individual organic chromophores and charge transporting polymers to learn how conformation affects wasteful charge trapping in organic photovoltaics. By varying polymer globule size and composition, electronic heterogeneity can be studied at the many important length scales of a functioning organic photovoltaic device.

Conformational dynamics of proteins in crowded environments
In their cellular environment, proteins must perform their function in the presence of dissolved macromolecules exceeding 200g/L, a condition that is ignored in most biochemical assays. These macromolecules can have significant effects on protein dynamics and activity, mainly due to the excluded volume created by the macromolecules. Molecular crowding has been shown to increase enzyme-substrate binding efficiencies, affect drug pharmacological response, and increase the rate of misfolding of prion proteins and the rate of aggregation of proteins implicated in Alzheimer’s disease. However, a protein’s individual folding trajectory, which contains crucial information about its energy landscape that is lost in ensemble experiments, is also expected to change significantly in the presence of crowding agents. We will examine protein folding and enzyme activity at the single-molecule level under crowded conditions. Critical to this approach is avoiding surface-attachment, a common single-molecule technique, as this practice has been shown to alter protein folding dynamics and may dominate the crowding effect. We can avoid this difficulty, while still observing the molecule for long enough times to capture full folding trajectories, with a specialized microfluidic device that uses electroosmotic flows to cancel Brownian motion of single fluorescent molecules in solution. We have recently used this device to observe single solution-phase proteins for over 1s without immobilization. Our trajectories will provide unique information about how crowding influences protein behavior, improving the picture of in vivo function, signaling, and pathological misfolding.