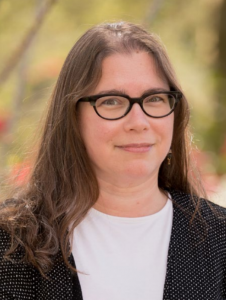 Catherine J. Murphy holds the Larry R. Faulkner Endowed Chair in Chemistry at the University of Illinois at Urbana-Champaign. She earned two B.S. degrees from Illinois (chemistry and biochemistry) in 1986, and her Ph.D. from Wisconsin in 1990. After postdoctoral fellowships at Caltech, Murphy began her independent career as an assistant professor of chemistry at the University of South Carolina in 1993. After promotions to associate and full professorships at South Carolina, she was recruited back to Urbana-Champaign in 2009.

Her laboratory has pioneered the colloidal synthesis of shape-controlled gold and silver nanoparticles in aqueous solution. In the 5-100 nm range, gold and silver exhibit brilliant shape-dependent optical properties that enable applications in chemical sensing, biological, imaging, mechanically improved polymer nanocomposites, and photothermal therapy for the ablation of pathogenic cells. She has coauthored over 260 peer-reviewed papers that have been cited 40,000 times, and has delivered more than 400 invited lectures.

Murphy’s honors include the the ACS Award in Inorganic Chemistry (2020), the Linus Pauling Medal (2019), the TREE (Transformational Research and Educational Excellence) Award from the Research Corporation for Science Advancement (2015), the Carol Tyler Award of the International Precious Metals Institute (2013), and ACS Division of Inorganic Chemistry’s Inorganic Nanoscience Award (2011) and numerous young investigator awards. She is a Fellow of the American Chemical Society, the Materials Research Society, the Royal Society of Chemistry, and the American Association for the Advancement of Science. She was ranked #32 in Thomson Reuters Sciencewatch List of “Top 100 Chemists for the Decade 2000-2010” and #10 on their list of “Top 100 Materials Scientists of the Decade 2000- 2010.” In 2015, she was elected to the U.S. National Academy of Sciences. In 2019, she was elected to the American Academy of Arts and Sciences.